The Jungle is a very dangerous place to be because you may get hurt the first few seconds or worse, eaten. The Jungle is full of loads of these terrifying creatures that will surely eat you and I am going to tell loads of information about them [well….some of them.]

Jaguar: The jaguar is a beautiful but horrifying wild cat that lives on the ground of the jungle. I started with the jaguar because it is at the top of the food chain in the jungle and even slays CROCODILES! They have very powerful jaws and could kill you in one bite. Their fur is normally white, cream and yellow but some have a reddish tint. The jaguars diet contains deer, crocodiles, peccaries and mostly tapirs however, there are loads more. The population of jaguars are quite poor as there are only around 15,000 of them still alive. I hope you learned a lot about the jaguar but now lets learn more about the toucans.

Toucans: Toucans are large birds that have a massive beak and beady eyes. Their beak comes in handy all the time when they want to eat. They normally eat fruit and plants of trees but then they get horrible ache in their stomach and unfortunately die. Through the past few years toucans have started to chomp on other things such as insects. Yes I know it DISGUSTING but that’s what they eat! Well…..toucans move around the jungle all the time. They make nests in one tree one week and then spend a week in another. Toucans have no ears but they can hear a lot better than we can, for example if there were a jaguar eating a tapir 20 miles away from him or her the toucan could hear it, CRAZY RIGHT! I hope you learned a lot about toucans but it’s time for the spider monkeys!

Macaw’s: Macaws are very coulerful types of birds. They are just like parrots but have to live in a certern part of the world because of the heat. Macaws also have long beacks like the toucans to open nuts and other hard things. They also live at the top of the rainforest also know as the emergent layer. They build nests and raise their young until they are 21 in bird years. Macaws live up to around 63 in bird years. 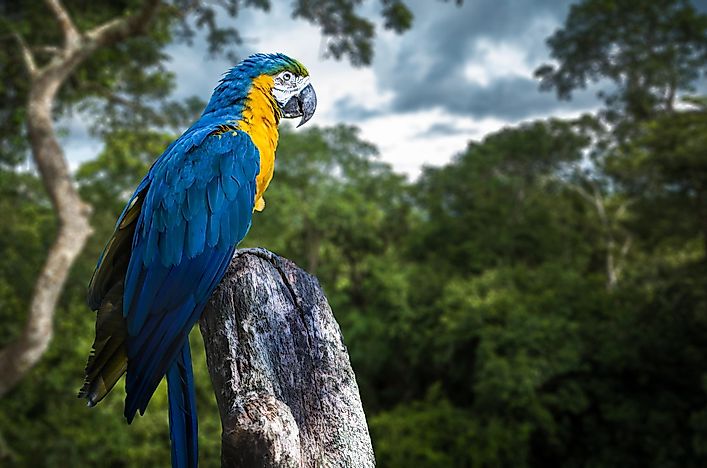