We went to Fountains Abbey in North Yorkshire to see what happened when monks were around and to help us with the Tudors because we are studying the Tudors in class.

When we arrived at Fountains Abbey we met four people. We went into the workshop and when we were walking up stairs it smelt of sheep poop and wool. When we got up to the workshop place we sat down on benches. Then one of the people came other and said to all of us, “You’ve got some activities to do.” Then we went down onto the floor to do our activities. It was about what the Monks can do and what they can’t do. On one of the rectangle shape of paper said they took 4 baths a year but I thought it was false but it’s actually true. One of the people said to us, “Well done.”

All of us, even the teachers, dressed up as Monks. We split up into two  groups. One of the groups went to a place that was  built long, long ago and another group went to see the ruins of Fountains Abbey. A lady took my group to see the building that was built long,long ago. Maleeha’s group went to the ruins of Fountains Abbey. Then we went through the gates of the building. Then we swapped to go to the different buildings and ruins.

We went into the rooms of the ruins. For example: The Lavatorian room was for washing your hands and having a wash every four months and after when you’ve eaten and before when you are getting ready to eat. The Warm room for having a bath and getting warm. There was a place where the Monks slept and where they pray and sing. They have six services. When they woke up it was from a bell that tells you what time it is and it rings what the time is. The first service was at two o’clock in the morning.

We met back at the workplace and took off our monk costumes and went to have our dinner at a small place. Before we had our dinner we wrote our name with ink on a piece of paper. We ate our dinner in silence just like the monks did.

After lunch we went to look around an old house of a boy who died in the World War II. We saw a book that had the little boys name on. There was a big hall and Mr Devlin said to us this was the place where they had parties and said to Miss Syed you could have a party here. We all started laughing.

We walked out of the old house and went through the gates to the mini buses to come home. 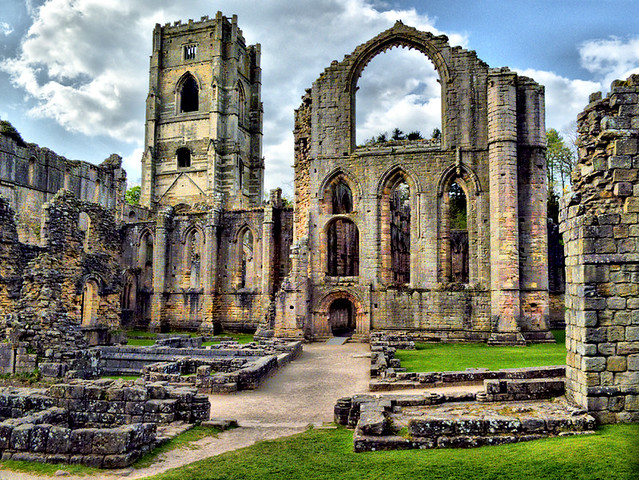 One thought on “My trip to Fountains Abbey”