1. All pandas in the world are on loan from China.

4. The giant panda is actually a bear.

5. Pandas eat the feces of their mothers.

7. The life span of giant pandas in the wild is approximately 20 years.

8. Out of their natural habitat more than 60% of male pandas exhibit no sexual desire at all.

9. The west first leaned giant panda in 1869,when a French missionary received a skin from a hunter.

10. Female pandas are fertile only up to 3 days in a year.

11. The giant panda spends around 55% of its life collecting,preparing and eating Bamboo.

12. One of the reasons the WWF chose the panda as their logo was save printing costs.

13. Pandas have lived on Earth for about 2 to 3 million years.

14. When a baby panda is born,its shipped by FedEx to china to help to expand the gene pool.

17. A group of pandas is called a ”Embarrassment”.

18. Pandas eat bamboo largely because they have no umani taste receptors.Meat tastes bland to them.

19. In ancient times,chinese people feared pandas and described them as metal-devouring black-and-white ”Tapirs”.

20. Pandas have one of the highest bite forces than any carnivore.

22. Grown pandas have to eat as much as 80 pounds of bamboo per day to meat their daily nutritaonal  needs.

23. Pandas are considered to be endangered, with about 1,600 in the wild and another few hundred in captivity.

24. A newborn panda weighs less than a iphone. 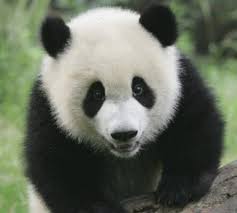