National DNA day is a unique day where students, teachers and the public can learn more about genetics and genomics. The day commemorates the completion of the Human Genome Project in April 2003, and the discovery of DNA’s double helix in 1953.

DNA, or deoxyribonucleic acid, is the hereditary material in humans and almost all other organisms. Nearly every cell in a person’s body has the same DNA. Most DNA is located in the cell nucleus (where it is called nuclear DNA) , but a small amount of DNA can also be found in the mitochondria (where it is called mitochondrial DNA or mtDNA).

The information in DNA is stored as a code made up of four chemical bases: adenine (A) , guanine (G) ,  cytosine (C), and thymine (T). Human DNA consists of about 3 billion bases, and more than 99 percent of those bases are the same in all people. The order, or sequence, of these bases determines the information available for building and maintaining an organism, similar to the way in which letters of the alphabet appear in a certain order to form words and sentences.

DNA bases pair up with each other, A with T and C with G, to form units called base pairs. Each base is also attached to a sugar molecule and a phosphate molecule. Together, a base, sugar, and phosphate are called a nucleotide. Nucleotides are arranged in two long strands that form a spiral called a double helix. The structure of the double helix is somewhat like a ladder, with the base pairs forming the ladder’s rungs (steps) and the sugar and phosphate molecules forming the vertical sidepieces of the ladder.

An important property of DNA is that it can replicate, or make copies of itself. Each strand of DNA in the double helix can serve as a pattern for duplicating the sequence of bases. This is critical when cells divide because each new cell needs to have an exact copy of the DNA present in the old cell. 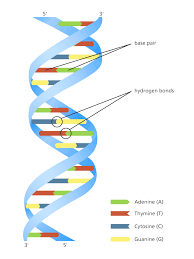 Why has DNA been useful?

DNA has been useful in solving crimes and developing medical treatments (this has also made a huge impact on cancer treatment). DNA has also helped tracing children’s parents. For example if the father/mother  disbelieves the children are biologically from a certain person DNA can be used to prove this either way.

When did police start using DNA for crimes?

DNA profiling was originally developed as a method of determining paternity, in which samples taken under clinical conditions were examined for genetic evidence that could link parent to child. It first made its way into the courts in 1986, when police in England asked molecular biologist Alec Jeffreys, who had begun investigating the use of DNA for forensics, to use DNA to verify the confession of a 17 year-old boy in two rape-murders in the English Midlands. The tests proved the teenager was in fact not the perpetrator and the actual attacker was eventually caught, also using DNA testing.

The first DNA-based conviction in the United States occurred shortly after in 1987 when the Circuit Court in Orange County, Florida, convicted Tommy Lee Andrews of rape after DNA tests matched his DNA from a blood sample with that of semen traces found in a rape victim.  The first state high court to rule in favor of admitting DNA evidence came two years later in West Virginia.

One thought on “DNA day”